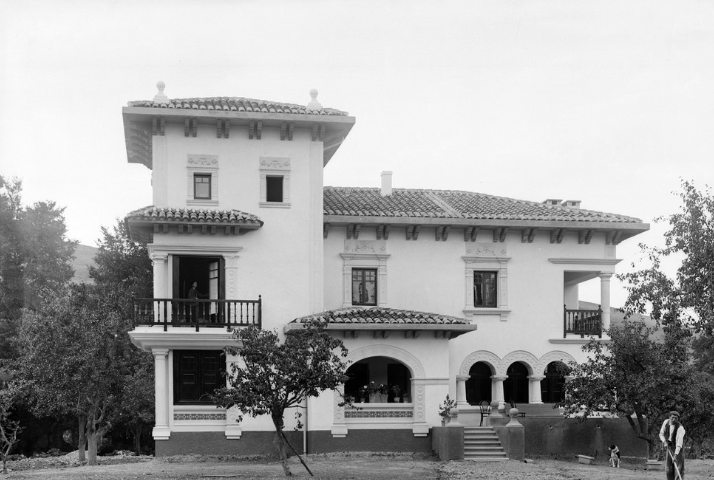 Anyone who wants to understand the figure of Gustav Winter must also understand
the type of environments in which he existed … For that reason, our investigation has
strived to discover who his most trusted people were, and what sort of activities they
were engaged in.
One of the characters in this story who was most closely linked to Winter was
undoubtedly the Austrian Herbert Heide, who had been living in Barcelona since 1921.
Heide was Gustav’s partner, representative, and agent in Spain. In fact, the Austrian
carried out numerous business operations along with the purchase and sale of real
estate in Gustav’s name. The relationship between the two was so close that they even
shared residence in the city of Burgos through the length of the Spanish civil war.
Heide lived in an extravagant mansion called “Villa Delicias” (“Delights Villa,” as it
would translate to English), which also housed Winter during his visits to Barcelona,
which in those years was the capital of fascist Spain.
The Austrian man came from a wealthy family in the city of Graz. He was a poorly
raised child who, despite his favorable economic situation, commited crimes in order
to defray his wasteful way of life, which led to his serving a sentence in a reformatory.
After fighting in World War I, he decided to immigrate to Barcelona, where he was
soon rubbing shoulders with monarchists, conservatives and the local nobility. He also
engaged in combat sports and arms sales, and did not hide his hatred of the “reds”, the
Jews or the freemasons.
In Burgos during the Spanish civil war, he made himself of service to the coup d’etat in
several ways, the darkest of which was his position as a Francoist spy for the SIPM
(Military Police Information Service).
Under the name of “agent 299”, Heide was responsible for a series of investigations
that included spying on the public as well as arrests, interrogations, and even torture.
These actions were undertaken in the effort to rid Burgos of dissent towards the fascist
cause, and in this effort, the so-called “Villa Delicias” became the scene of such cruelty.
In our book we include the details of this man’s life, his relationship with Winter, and
his activities linked to espionage and repression of the population during the Spanish
war. But to expand in detail on Heide’s activity in Burgos, we recommend the books of
the Burgos researchers who discovered this fateful chapter of Spanish history, and to
whom we are thankful for their superb work and collaboration.